See libtmux’s API and Quickstart to see how you can control tmux via python API calls.

Give warning and offer to fix DISABLE_AUTO_TITLE.

Raise exception if not running. More descriptive error if no server found.

Return Pane if one found in env

Reattach session (depending on env being inside tmux already or not)

If TMUX environmental variable exists in the environment this script is running, that means we’re in a tmux client. So tmux switch-client will load the session.

If not, tmux attach-session loads the client to the target session.

tmuxp will check and load a configuration file. The file will use kaptan to load a JSON/YAML into a dict. Then config.expand() and config.trickle() will be used to expand any shorthands, template variables, or file paths relative to where the config/script is executed from.

A libtmux.Server object is created. No tmux server is started yet, just the object.

The prepared configuration and the server object is passed into an instance of WorkspaceBuilder.

A sanity check against libtmux.common.which() is ran. It will raise an exception if tmux isn’t found.

If a tmux session under the same name as session_name in the tmuxp configuration exists, tmuxp offers to attach the session. Currently, tmuxp does not allow appending a workspace / incremental building on top of a current session (pull requests are welcome!).

build() will build the session in the background via using tmux’s detached state (-d).

After the session (workspace) is built, unless the user decided to load the session in the background via tmuxp -d (which is in the spirit of tmux’s -d), we need to prompt the user to attach the session.

If the user is already inside a tmux client, which we detect via the TMUX environment variable bring present, we will prompt the user to switch their current client to it.

If they’re outside of tmux client - in a plain-old PTY - we will automatically attach.

In tmux 2.6, the way layout and proportion’s work when interfacing with tmux in a detached state (outside of a client) changed. Since tmuxp builds workspaces in a detached state, the WorkspaceBuilder isn’t able to rely on functionality requiring awarness of session geometry, e.g. set-layout.

Thankfully, tmux is able to defer commands to run after the user performs certain actions, such as loading a client via attach-session or switch-client.

Upon client switch, client-session-changed is triggered [1].

Return True if file has a valid config file type.

Return expanded path based on user’s $HOME and env.

This is necessary to keep the code in the WorkspaceBuilder clean and also allow for neat, short-hand configurations.

tmuxp configs allow for it to be simply a string:

Kaptan will load JSON/YAML files into python dicts for you.

Return config in inline form, opposite of config.expand().

Return a dict with “trickled down” / inherited config values.

This will only work if config has been expanded to full form with config.expand().

tmuxp allows certain commands to be default at the session, window level. shell_command_before trickles down and prepends the shell_command for the pane.

It handles the magic of cases where the user may want to start a session inside tmux (when $TMUX is in the env variables).

Optionally accepts session to build with only session object.

Without session, it will use libmtux.Server at self.server passed in on initialization to create a new Session object.

Actions to apply to window after window and pane finished.

When building a tmux session, sometimes its easier to postpone things like setting options until after things are already structurally prepared. 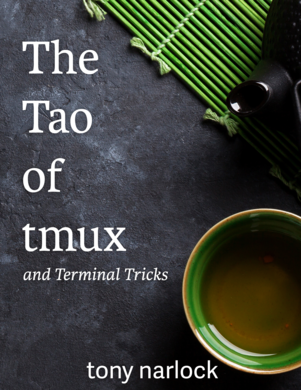 The Tao of tmux is available on Leanpub and Kindle (Amazon).

Read and browse the book for free on the web.